Hi, it's Kim from Katydid Cards.

I'm waiting patiently for the new brad releases due in the Eyelet Outlet store in April.  Truth be told, I'm champing at the bit as I've seen sneak peeks of them and they are fabulous!  In the meantime, I want to share I card I made with one of the equally fabulous brads from the fall release, the Pig & Sheep Brads. 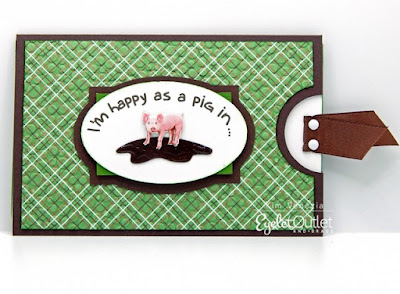 Isn't he the cutest l'il pig?  And he sure is happy standing in that pile of... 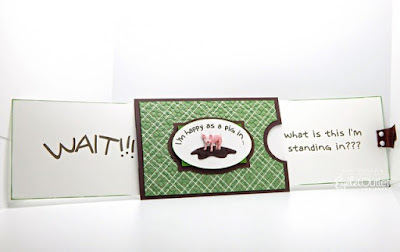 This is a double slider card.  Believe it or not, the hidden slider mechanism is a strip cut from a plastic grocery bag.  The panels are strategically attached to the strip, so when you tug on the pull tab, it slides both sides out. 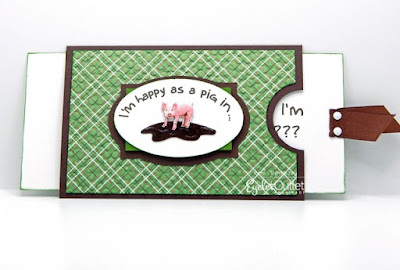 The pig is sitting on his puddle cut from Early Espresso cardstock which I coated with Glossy Accents.  He's situated on a double mat cut from a file purchased in the Silhouette store.  I found a snappy plaid to match and embossed it with the Tiny Bubbles embossing folder

The pull tab was created by folding a piece of satin ribbon to match the cardstock and attaching it to the sliding panel with two white brads from the Winter Eyelet Mix.

I really enjoy the animal brads.   Here's the adorable card using a number of them...in fact, the whole herd.  Next week I'm sharing a card using the other brad from this pack, the sheep.  I hope you come back to see it. 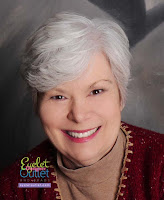 Kim from Katydid Cards
Who provided the inspiration for these cards?  Katy did!
Posted by Katydid Cards at 12:00 AM