I (Lauren) love to make mandalas! Usually I draw or paint them, but it's also realllllly fun --and easy!-- to make them out of stickers. For the cards in this post I've used Eyelet Outlet Enamel Dots and Shapes, which I love because they're self-adhesive, come in many different styles and colors, plus they're a really good value! 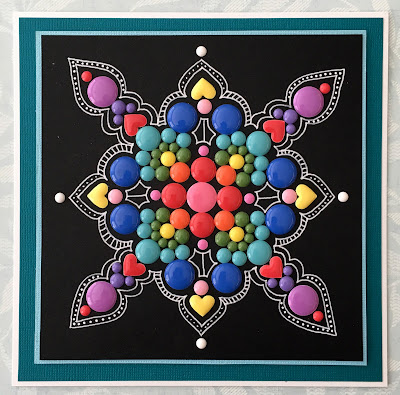 For this card, I've used Multi Size Enamel Dots in several shades, as well as some larger (12mm) Flat Top Enamel Dots and a few Multi Color Heart Enamels and Star Enamels as accents. There are many ways to build a mandala, and no real rules, as such, so it's definitely fun to play around and experiment. I chose a black background to really make the colors pop. At the end I added a little bit of doodling with a white gel pen, just to frame the design. 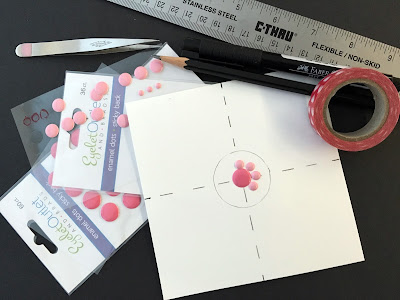 My mandala cards were composed by arranging the enamels in a circular design, working out from the center. Often I just wing it, but when my design calls for precision, I like to start with a perfect circle--I usually trace around a cup, or a roll of tape! I mark the center point of the circle, as well as the center points of each side of my paper. Ordinarily I do this verrrrrry lightly in pencil, but in this case I've darkened it up so you could see what I mean. Once I've got a basic framework in place it's on to the FUN PART! :) 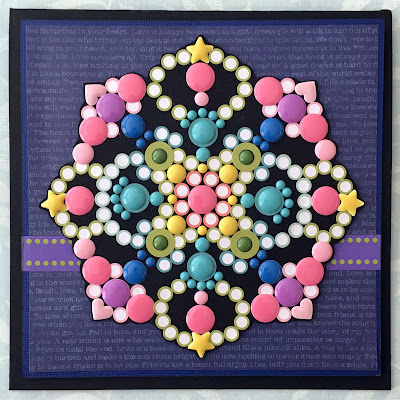 For my second card, I added a few colorful reinforcement stickers from the office supply store into the mix, as well as the round centers of the stickers that would ordinarily be discarded. I liked them, though, because they added another size of circle to fill in between the enamels. Plus the white centers added even more contrast to the design. When I was done, I neatly trimmed around my mandala with scissors, so that I could add even more color in the background. 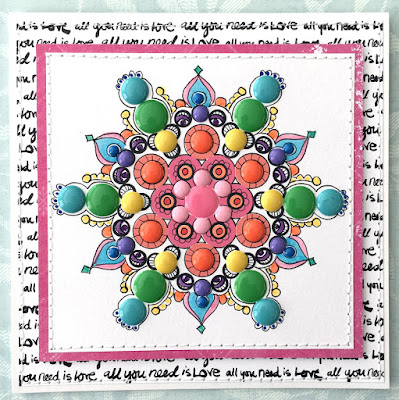 On my third card, I switched to a white background, but stayed with the Enamel Dots and Shapes, page-reinforcements, and centers. This time I added quite a bit more doodling with a fine black pen, which allowed me to work in other shapes, like scallops, diamonds and petals. 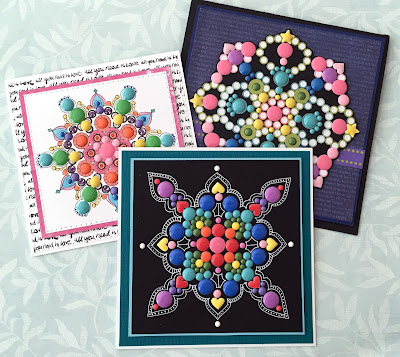 There's really no limit to what you can create with just some basic shapes and a little imagination. I hope you'll be inspired to make mandalas or other geometric designs to use in your cards and projects!

Lauren Bergold
has posted quite a few mandalas on her blog
and also made a fun Mandala Pin Board to give you even more ideas!
Posted by lauren bergold at 3:00 AM