Inspiration really is EVERYWHERE! Sometimes I (Lauren) find it myself, and other times, a friend or family member sends me something which triggers an idea. These cards are the result of the latter; I'll explain in a minute. But meanwhile check out the adorable Eyelet Outlet Llama Brads and Llama Washi Tape: 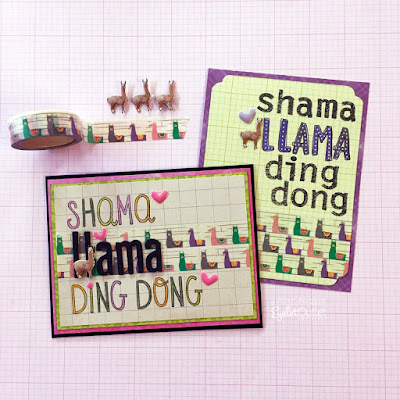 Now, here is the inspiration, an actual pair of socks spotted in a shop by my craft bestie and EO Design Team alumnus, Stephanie: 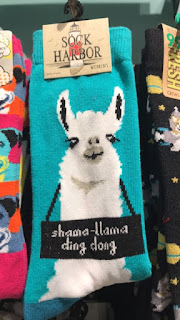 Of course as soon as I saw it I immediately thought, "LLAMA BRAD CARD!!!" :) I made the vertically oriented card first, using two sets of alphabet stamps for the sentiment. You'll notice the base is a fun graph paper print; Doodlebug has a whole rainbow of them, which I love, even just aesthetically. But also... if you're going to hand stamp a long sentiment, one letter at a time, it's quite handy to work on a paper which has a nice strong horizontal line. Just sayin'. I placed the star of the show, the handsome Llama Brad, next to his name, popped on a purple Heart Enamel and filled the rest of the panel with Llama Tape. 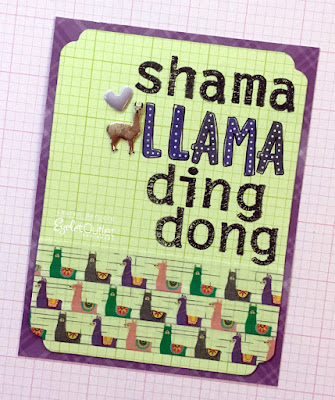 I actually love everything about the first card, but it did occur to me as I was working that it would be fun to have more color in the sentiment AND I'd like it even more if the sentiment was on three lines instead of four. So this time I chose a stamp set that could be colored in, and turned my paper horizonal so that "ding dong" fit on one line. Since that meant no "extra" space at the bottom, I placed two strips of Llama Tape right down the middle, and spelled out "llama" in chipboard letter stickers so they'd stand out. The two lowercase L's seemed like the perfect place for another Llama Brad. And since the Heart Enamels were still sitting on my worktable, it seemed a shame not to add a few. 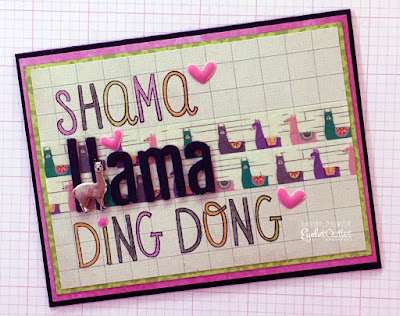 What have you seen lately in a shop, a website, or even a catalog, that made you think, "Hey! That might look good on a card!"? Whatever it was, I'm going to bet that Eyelet Outlet has a brad which could make your idea even better!

Lauren Bergold
would actually
wear those llama socks!
Posted by lauren bergold at 3:00 AM