WARNING: the diabolical pun level of this post is VERY HIGH; pun-haters look away now!

I (Lauren) have a pair of extra-punny cards today, featuring our adorable Sheep Brads and a few other cool Eyelet Outlet goodies! 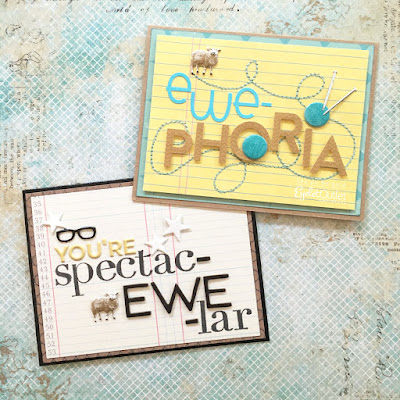 Last week I posted some Llama Brad cards that were inspired by a pair of novelty socks. Continuing in that same vein, my first Sheep Brad card was inspired by this cute pouch my sister gave me. (Because yes, there does seem to be a Pun Gene, and our family definitely has it!!!) :) 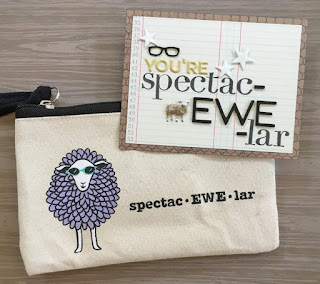 My first thought (of course!) was, "Hey! We have Sheep Brads AND Eye Glass Brads!!!" so obviously I had to use both. I created the sentiment with a mixture of stamps (spectac and lar) and alphabet stickers. My original idea for the card did not involve Star Brads, and would have had the specs right next to "you're". But because the Eye Glass Brads are open at the center, they have their prongs off at the edges, and actually need two small holes, and I didn't punch the holes precisely enough. Of course I could have started over, but at times like these, I will usually try to come up with a fix. In this case, it was to move the glasses up, and place a white star over the resultant holes; then add a couple more stars to make the placement seem more intentional. In the end, I think they look really good, and if I was going to make a second card like this, I'd plan on stars from the beginning! 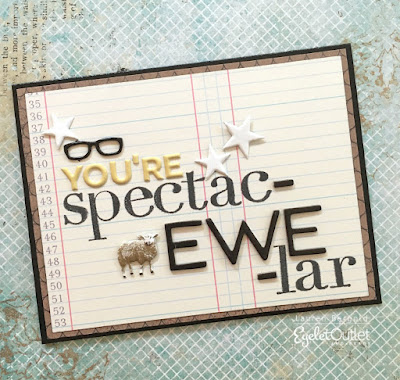 The thing about puns is, it's hard to stop at just one, lol. So while I was making the "Spectac-EWE-lar" card, I kept thinking of other words with "EWE" in them. One of which was, "EWE-phoria". At first I wasn't sure how that would translate into a card, but when I was retrieving the Star Brads for the first card, I saw my Knitting Brads and thought about how much I love yarn, some of which --coincidentally-- comes from sheep. I drew the long tangly trail verrrrrrry lightly in pencil and stitched over it twice with my sewing machine. Then I added my alphabet stickers and finally set the Sheep Brad, plus two balls of blue yarn (the packs also contain yellow, purple and green) and the needles from the Knitting Brads. 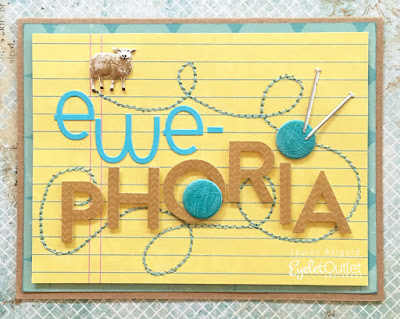 That's all for today. If you need me, I'll be right over there, near the air conditioning vent, knitting! ♥