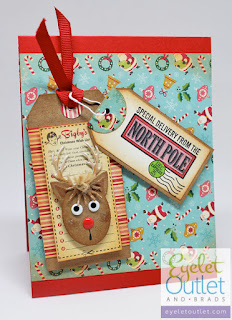 Hello again, friends!  I'm happy to be here with you today (thought it wasn't gonna happen there for a while, since we have been having cable/internet problems off and on all week!).

Sometimes ideas for creativity come quickly, and others...well, some ideas have to steep for a while!   I had been contemplating what to do with these antlers for a while now, but the other day (when I was rearranging things in my studio so the cable guy could get in there!) I came across a Tim Holtz Christmas greenery die, and a lightbulb went off!  It's funny how a quick glance at something can really get the ball rolling!

I took that die, a leaf die from a Spellbinders set, along with an oval, and came up with this little fella!  The oval forms his face, the leaves, his ears, and the Christmas greenery with a knot of jute on top his "fringe."  He's got Eyelet Outlet brad eyes, a shiny red enamel dot nose, and of course, the antlers that were the initial inspiration for the whole project.  A simple line with a teardrop shape for a mouth is the only "drawing" that I had to do.  A few swipes with a pale pink Copic marker add some accents, sponging with distress ink gives dimension, and a glitter pen brings just enough magical sparkle! 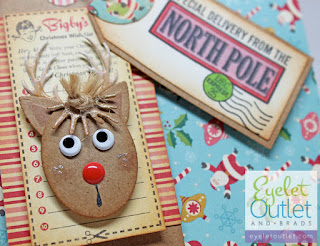 I had so much fun making this project!  I hope you like it!  It isn't too late to still crank out a few Christmas cards, or a few gift tags for the big night!   Have fun! 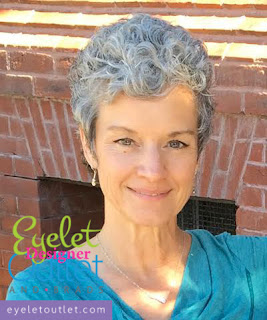