Let's Pretend It's Spring For a Minute, Ok?

I (Lauren) realize that compared to the winters in, say, Canada or even New England, we have it pretty easy here in Central New Jersey. Nevertheless, there is always a point towards the end of January or the beginning of February, where I feel like I just cannot stand one more day of cold, grey, overcast weather. Luckily I have Eyelet Outlet Wide Flower Washi Tape and Bright Dragonfly Brads, so I can make myself a little bit of Spring, in card form: 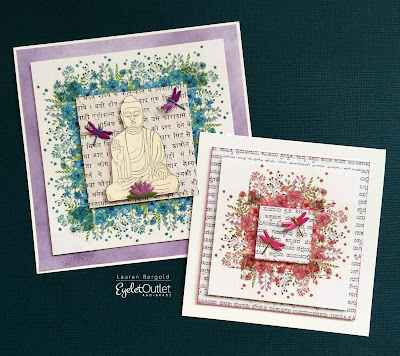 I love that this Wide Flower Washi alternates about a four inch repeat of the same pattern in blue and pink. Of course you can use the tape in long strips that feature both colors, but sometimes I like to separate the two and use them individually, which is what I've done here. Because this tape has a design that's more straight and solid at its bottom edge than its top, I thought it might make sort of a cool border, with the bottom edge towards the center. For the smaller card, I cut one complete repeat of pink flowers from the roll of tape, then snipped it in half. I applied one 2" section along the side of a 3.5" square of plain white cardstock, just following the edge of the paper with the edge of the tape; then I affixed the other 2" section to the opposite side of my square. Since I needed a second run of pink flowers, I cut the intervening strip of blue flowers off the roll and stuck the whole thing along the edge of a separate 5" square of white cardstock. Then I came back to the pink flowers and cut another run, snipped it in half, and applied it to the other two sides of my square. 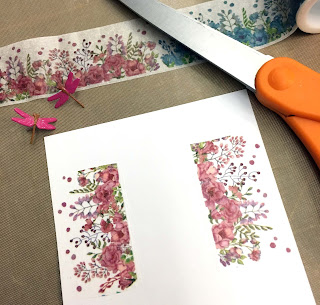 In the center of the design, I was left a little blank window of about 1.5" that I could use to frame a sentiment, a photo, a stamped image or, in this case, a little snippet of Thai book paper, with a couple of pink pretties from the Bright Dragonfly Brad set, which i bent very gently at the centers, so their wings would stick up a tiny bit, as if they just alighted on my card. Something I love about this brad set is that you get purple, pink and yellow Dragonfly Brads, all together in the same packet. Something else I love is that these guys are the current special deal in the Eyelet Outlet Store, so for a limited time, they are only 99c!!! 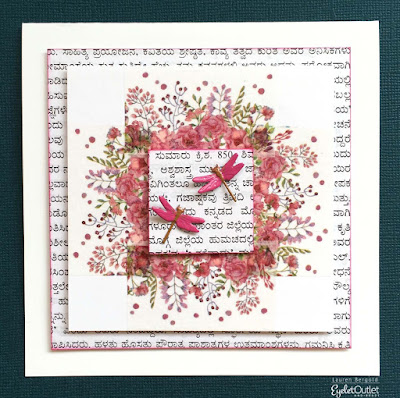 Since I had started the blue square, I had to finish it, so I cut off 3 more segments... (yes, you'll be seeing something made from "extra" pink flowers sometime, lol!) ...and this time, I let the repeats overlap at the outer edges, which gives a really pretty soft effect that I love. This time the framed area in the center was just a smidge bigger than 3" square. Coincidentally, I had just found some very pretty small Buddha drawings in an Indian travel book, so I fussycut one of them, added a purple waterlily from the Frog Set to match my handsome pair of purple Dragonfly Brads, backed the panel with  pretty Hindi script, and finished off the card with a mat of soft purple paper. 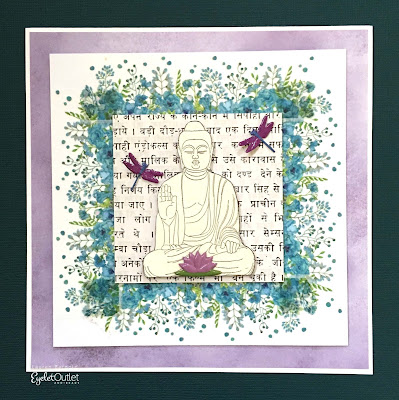 I hope you'll be inspired to look through your Eyelet Outlet goodies, and create your own tiny world that is the color, season, and temperature you're in the mood for right now! ♥

Lauren Bergold
is really really in the mood for Spring!
♥
Posted by lauren bergold at 3:00 AM