Totally Do-NUTS About You!

Let's face it, doughnuts are awesome. In real life, they're not something most of us can have in unlimited quantities, which is why I (Lauren) am always thrilled to break out the Eyelet Outlet Doughnut Brads: they're fat-free, calorie-free, and full of cardmaking possibilities! 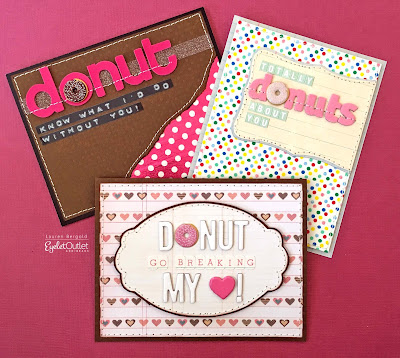 Since we're in the middle of January, I think we're all sort of in Valentine mode, so I've made three cards that would work perfectly for the holiday, but aren't too specifically Valentine-ish. Because it's nice to have choices, right? The first one actually has hearts on it, but that was mostly because I love the colors of this Skinny Heart Tape with the Doughnut Brad that I've swapped in for the "O". I swapped a Heart Brad for the entire word "heart", as well, which makes my sentiment fit really nicely inside the label shape. I'm always on the lookout for papers with strong, straight horizontal lines in them. Ledger and notebook patterns not only look great, they're a great helping hand for placing my tape stripes neatly in the background! 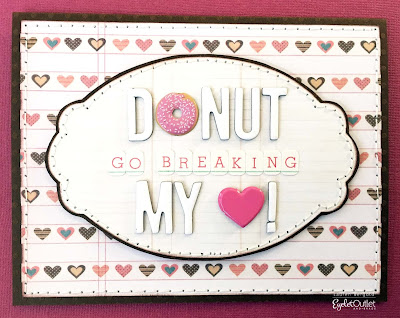 One of the reasons I chose this colorful Dot Washi Tape is that it kind of reminded me of rainbow sprinkles, which are awesome with Doughnut Brads, don't you think? I made my background patterned paper by neatly lining up strips of the tape on a piece of plain white cardstock that I'd cut down to fit perfectly on my A2 card front. This time I moved the sentiment panel off to the right side of the card, but balanced it out by placing the letters towards the left side of the label. 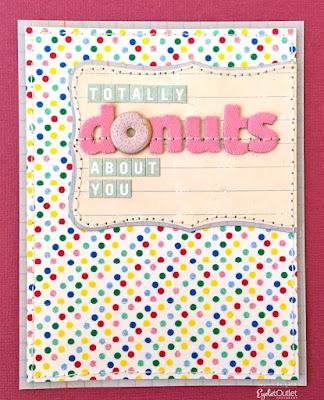 I love pastel pink as much (or MORE, lol!) as anyone I know, but for my third card I chose to celebrate the chocolate Doughnut Brad. I made a background panel from Pink and White Dot Foil Tape, which I revealed unevenly by tearing some dark brown dotted cardstock... a bit like peeling the wrapper of a candy bar! I composed my sentiment with oversized vinyl letters and trimmed-down Dymo labels; and added a few strips of Skinny Brown Glitter Tape just behind the word "donut" for even more emphasis. 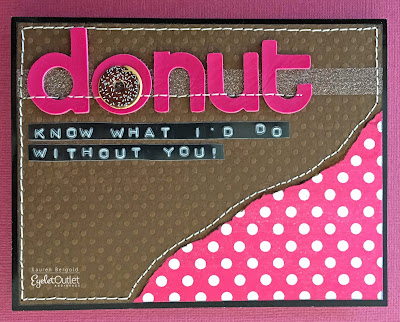 I hope your day has included both creativity and treats... the Eyelet Outlet Store is a pretty good place to find both of those! ♥

Lauren Bergold
enjoys the occasional donut,
don't you?
Posted by lauren bergold at 3:00 AM