Father's Day is only a few days away, but I (Lauren) couldn't resist making a few last minute cards which feature our two of our four new Eyelet Outlet Custom Washi Tapes, which coordinate perfectly with our Brads and our Clear Stamp Sets! The good news is that both of these designs would also work really well as birthday cards! 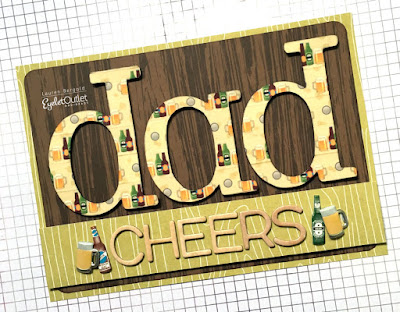 My first card features the new Beer Tape, which mixes beautifully with the Beer Brads as you can see! (It also coordinates perfectly with the Beer Stamp Set, though I didn't use that this time.) I lined strips of tape up neatly on scraps of plain white cardstock, then used the "D" and the "A" from a really fun oversized set of chipboard aphas as templates to trace and cut out my letters. I had planned on running the "CHEERS" strip through the center of "DAD", but it turned out to cover up a bit too much of the tape for my liking, so I wound up moving it further down, instead. 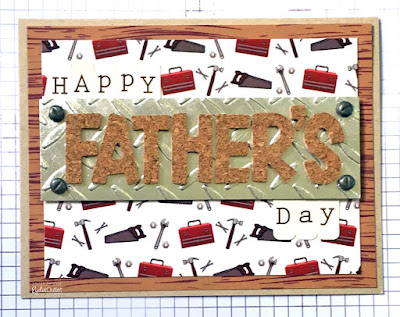 I've used the Tool Tape as the background on my second card, matting it on a panel covered with Hardwood Floor Tape. I spelled out "Happy Father's Day" with tabbed letters as well as some chunky cork stickers; the latter i attached to a panel of silver metallic cardstock which I'd run through a diamond pane embossing folder. I attached the panel to the card with Screw Brads, which are incredibly useful. Each packet contains both large and small sized, as well as flat and phillips heads. This tape would also coordinate perfectly with our Tool Box and Nail Brads as well as Saw Brads and also the Tool Set, which contains hammers and wrenches!

If you need more inspiration, be sure to check out the Eyelet Outlet Blog frequently, because the design team are constantly dreaming up new ideas!

Lauren Bergold
wishes everyone a very
Happy Father's Day!
Posted by lauren bergold at 3:00 AM