Hello everyone!  It's Kim from Katydid Cards with you today.

I knew exactly what I wanted to do with my Teddy Bears when I got this, "You're Clawsome", stamp set.  Does this claw machine bring back memories for you?  It does for me!  I used to love playing this (and many other) games in the arcade when I was young. 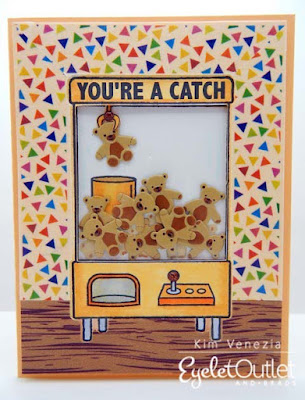 I stamped the image and scanned it into the computer as I wanted to make several layers with different apertures.

For the top layer, I cut around the perimeter of the claw machine on a panel which is 4" x 5 1/4".  I placed Confetti Washi Tape on the wall and Hardwood Washi Tape on the floor.  The opening I cut allowed me to wrap the washi around it so it's nice and secure.

The second layer has the stamped image, colored with Copic markers.  I cut a rectangle around the inside of the claw machine.  I attached a piece of acetate directly to the back of this layer and then adhered it to the bottom layer after coloring and attaching the brads.

So, the bottom layer shows the complete image minus the teddy bears included on the stamped image as I didn't want them to peek out from behind the brads.  Since I scanned this into my computer, I was able to erase the teddy bears with ease.  I colored the shute and claw.  Here's a closer look at the brads behind the acetate. 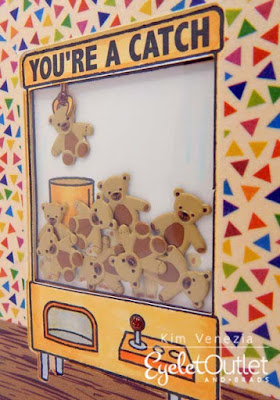 Inside, the sentiment plays off the Teddy Bears with another little bear brad to accent.  I cut the panel a bit smaller so I had room to border it with some additional Confetti Washi Tape. 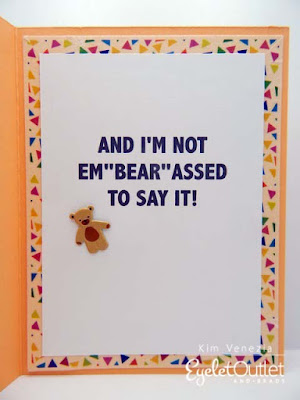 I'd like to make another one of these with a combination of brads as I think that would look awesome and is a fantastic way to combine brads leftover from previous projects.

Thanks for visiting!  I'll see you next week with another project! 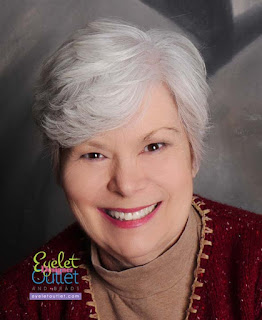 Kim from Katydid Cards
Who provided the inspiration for these cards?  Katy did!
Posted by Katydid Cards at 3:00 AM